Quick Shots: "Let's Here It for the Deaf Man" by Ed McBain 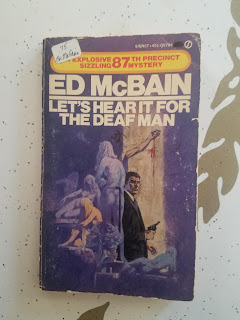 Now, I've read Ed McBain before; a few times actually sometimes as Ed McBain sometimes under other names. BUT I've never read an 87th Precinct novel and now that I have I feel like an idiot. Why, oh why was I depriving myself? Well, actually I know why: it was an intimidating 55 book series and an admitted dislike of police procedurals. The concept of simply procedurals implies there's less fireworks than I usually like in a book.

That whole paragraph was just there for me to announce to the world that I've been a dunce.

Ed McBain was Evan Hunter, sort of anyway. Evan/Ed could write the hell out of a book. I've read some of the stand alone crime/private eye novels he wrote towards the beginning of his career and uniformly enjoyed them. "I'm Cannon - For Hire" is a lot of fun in a specific 50's pulp kind of way, as is his work as Richard Marsten. I think I have have read some of his Matthew Hope series, but that was many beers and books ago so I can't rightly remember.

That whole paragraph was just there for me to announce to the world that I damned well knew Ed McBain could write and I STILL didn't read an 87th Precinct. What a dumbass.

So, I picked "Let's Hear it for the Deaf Man," because I have seen the film adaptation of "Fuzz" cause if Burt Reynolds is in a movie I'll watch it. Plus Yul Brenner. Plus Rachel Welch. Even plus Jack Weston. The Moriarty-like character of The Deaf Man, a criminal mastermind who toys with the boys of the 87th intrigued me. Half a page in I regretted all the lost time. McBain crafts several precision stories, crimes and criminals that need to get caught/solved by our heroes. Then he jumbles and and crosses the wires a bit. We bounce back and forth while semi-lead Steve Carella tries to find out who Crucified a hippie. While Kling tries to catch a cat-burglar who leaves kittens as his calling card. While the rest of the squad pop in and out helping out and dealing with their own crimes and misdemeanors. Then topping it off with The Deaf Man who is cryptically telling the 87th when and where he's going to rob a bank. Then we spend time with The Deaf Man and his associates and then we spend time with the unnamed city where all the action takes place. The city is just as important as the rest of the cast, we get bursts of activity, like small snippets of a news story rolling at the bottom of a TV screen while the newscaster tell your a bigger tale. The characters all had unique personalities and it seems by this time in the series, McBain knew them like old friends. The dialog crackles between the cops, bickering and spit-balling and joking. The action when it does come is fast and clear. Then it all wraps up nicely with some nice twists and turns.

Bottom line, you should probably stop reading this and go pick up a Ed McBain book.

Posted by bloodyspicybooks at 8:11 AM