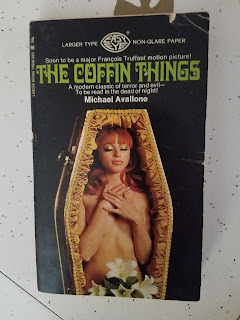 The cover of "The Coffin Things" by my man Michael Avallone promises that it'll soon to be a movie by François Truffaut. Damn. That's a shame that never happened. I'd give up a finger or two to see that movie. There's a lot of paperbacks claim "Soon to be a Motion Picture" on the cover, but this might be the first one I've come across that exclaims who the director was going to be. Hmmm. There's a story there that's probably lost to the sands of time. Anyway, last year I bought a box of Avallone books off eBay. I mostly was looking for the Ed Noon's that were in there, but "The Coffin Things" caught my eye. This edition has a great cover that it shares with a Len Deighton book. There's a lot going on with this novel and I haven't eve talked about what it's about.

"The Coffin Things" is a carnival fun-house of a book. Once we bought our ticket and walk into the home of Dr. Stewart Garland, the world's finest mortician, the rug is constantly pulled out from underneath us. It's a full-tilt ride full of corpses, grisly murders, private eyes, local cops, nudity, ghosts (maybe),  lesbian sex in cars, missing plus found prostitutes, and interesting ways to spend the after-life. Being a Michael Avallone book there's Gary Cooper references, musical bits, James Bond name-drops with some spy-ish gadgets and a lot of old fashioned fun. Garland is the mortician to the rich in a small town and after a series of personal rejections and loss he looses his grip and begins to take his subtle revenge. Which he does in the nude in his basement mortuary, It's easy to imagine Boris Karloff in the part. It really has a feel of a classic 40's B-Horror-Movie. A spooky house film updated for the wild late-60's. Though hopefully Karloff would have remained clothed if the film was made. To top that off there are some "weird vengeance" pulp-vibes running through it, but like all of Avallone's work it really could only have came out of his typewriter.

Man, I loved this book. "The Coffin Things" is top-shelf Avallone, so particular, fun-loving and spooky. It might be my favorite of his novels, but it's hard to top a couple of Noon's. It's easily my favorite of his non-series work. Now I'm on a quest to track down the Gothics he did as Edwina Noone (perfect) which seem like they might be similar. It's not the easiest (or cheapest) book to track down, all old horror books seem to go for a premium, but there was at least two editions of it so that helps.

Posted by bloodyspicybooks at 8:20 AM