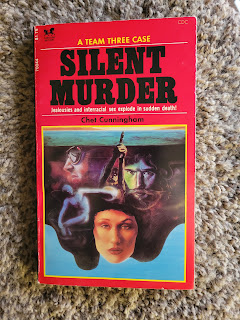 My recent discovery of Irwin Zacharia's books got me to buy a big stack of other novels put out by the low-rent and possible money-laundering scheme that was Carousel. Most of the authors that wrote for Carousel didn't have much of a career after their short stint (at least as far as I know, which isn't much) save writers like Mike Newton and Chet Cunningham. If you've been knocking around the world of Men's Adventure books for any length of time you've probably ran into a book by Chet Cunningham, whether or not it was under his name. He wrote about everything, from western series like Jim Steel and Brad Spear to YA post-apocalyptic series like Turbo Cowboys to more traditional M.A. stuff like writing Mack Bolan and The Avenger series. Plus, with Mark Roberts her wrote half of The Penetrator books which are really some of my favorite Men's Adventure books, having the right balance of craziness and action. So, when I came across Cunningham's name in the Carousel back pages, I eagerly bought up the two books that comprise the "Team Three Case" series.

I accidently read the 2nd book before the 1st one by grabbing it for waiting to get a Covid test with nothing else to read I just dove in. The basic Mod Squad-esque setup is that there's a white private eye named Ted, a Latinx ex-cop named Carmen and a black ex-cop named Barry. All together they are Team Three, get it? Together they solve mysteries. That's about it, it's a nice, uncluttered set-up. In "Silent Murder" Barry is visiting an old buddy in a small California town to see him perform at an art show where he is bizarrely murdered in front of everyone i.e., the titular silent murder. So, Barry starts poking his nose and even gets deputized to track down the killer. Carmen and Ted come up to help otherwise it'd be a Team One Case. There are attempted murders, speargun attacks, orgies, blackmail, nude modeling, a KKK douchebag, .38s, pocket .22's, firebombs, CB radios, and weirdo artists. Barry gets the most screen-time here, but that's not to say they any of them are fleshed out characters. This is a seriously short book, big print at around 150 pages and it moves lightning fast. It's really more of a mystery (though the solution is kinda easy to spot if you're old-hat at these type of things) so don't expect Cunningham in action mode. 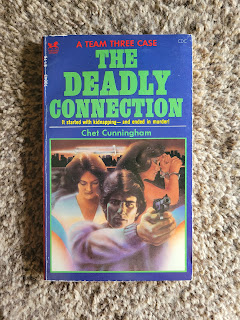 I enjoyed the book; it had a sleazy Cinemax does an 80's detective show vibe and I like the set-up. I'm sure they didn't pay enough for Cunningham to flesh anything out past a nice first draft so that's what he seemed to lay down. The defects are easy enough to overlook and Cunningham's no-frills style makes for fast enjoyment. He's a total pro. I'm glad I have another Team Three Case to tackle, I wonder if one of the other of the Three take front stage. A rotating lead would make sense with the set up. The Carousel books are hard and kind of pricey, I got good deal on mine, but I don't know if I'd recommend dropping too much on them. After all the cover price is $1.75, its certainly more than that in terms of thrills but not upwards of $20.
Posted by bloodyspicybooks at 8:41 AM