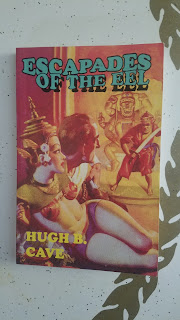 "The Evil Flame" by Justin (Hugh B. Cave) Case -- Cave is mostly known these days from his stand-alone horror work and his "Weird Tales," uh, tales. From Robert Weinberg and Stefan R. Dziemianowicz's "Hard-Boiled: 23 Great Stories from Dime Detective Magazine" I discovered his wonderful Peter Kane mysteries which have been collected a couple of times. They're a lot of hard-boiled, booze-soaked fun. Cave tells us that the "Spicy" pulp racket offered him more money to write for them, so under the tongue in cheek name "Justin Case" he did just that. A number of them are about "The Eel" who is out "gentleman correspondent" who has loose morals and an eye for the scantily clad ladies that do seem to pop up in the spicy pulps. In "The Evil Flame" he's at least pretending to be a private eye in Florida when an odd, beautiful dame asks him to help find her sister. What follows is a weird, voodoo, snake lust tale with plenty of tough guy and horror shenanigans with tons of fist fights, creepy crawlies, and night trips into the Florida swamps. The Eel is fun guy to hang around with, you know nothing about him but that just adds to the charm. The horror element was a nice surprise and I'm looking forward to the rest of The Eel tales. 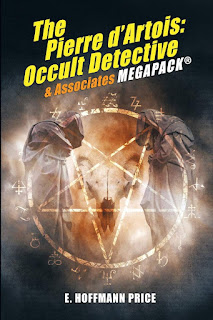 "The Peacock's Shadow" by E. Hoffmann Price -- Pierre d'Artois is a bit of a forgotten occult detective from the pulps. The characters debut was right about the same time Seabury Quinn's Jules de Gardin appeared and became popular. Not wanting to seem the copycat Price discontinued his swashbuckling French paranormal investigator. It's a shame, the more I read about d'Artois the more I like him better than Gardin. d'Artois is a master swordsman and spooky adventurer who with the help of his manservant and E. Hoffmann Price-stand-in Glenn Farrell get into all manner of supernatural escapades. Having read the first story in this collection and "The Peacock's Shadow" I realize that I am in the middle of a loose novel about d'Artois battle with the Peacock King or ya know Satan. There's a Sherlock Holmes/Watson dynamic going on between Farrell and d'Artois to give him the right amount of mystery, there's mysterious stolen mummies, there's women who look exactly like ancient paintings plus blackjacks, Lugers and battle axes. It's great fun, at some point the series works its way into the Spicy Pulps which are really becoming a guilty pleasure of mine, so I can't wait for that. Wildside Press 99 cent eBook is a treasure trove (like most of their collections) and for a buck you really can't go wrong. 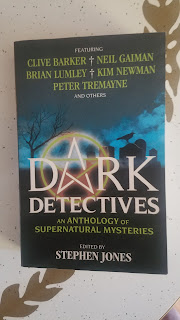 "Rouse Him Not" by Manly Wade Wellman - Wellman's a helluva writer. A lot of folks prefer his "Silver John" stories, the magical man who wanders with his silver string guitar and quells supernatural evils. For me it's a toss-up, cause the tales about John Thunstone, wealthy man-about-town and monster hunter are equally as entertaining. They all exist in Wellman's own universe along with evil sorcerers like Rowley Thorne, ancient creatures like the Shonokins, and kindly Judge Pursuivant who happens to be an occult scholar. Wellman is often a rural writer, spinning yarns about what lurks in the deep woods or innocent small towns of America. It really sets him apart. "Rouse Him Not" is the last Thunstone short story he wrote (he wrote two novels after the story) appearing like 30 years after the previous one. But 'ol Thunstone is up to his old tricks poking his nose into the death of a sorcerer in the 1700's, probing an evil sinkhole and dueling with what lies beneath with his trusty silver-sword cane. It's all wrapped up quickly and efficiently, it might could have used some more meat on its bones but it's a really fine example of an old pro tingling your spine.

SIDE NOTE: In 1988 the TV series "Monsters" adapted "Rouse Him Not" starring Laraine Newman and Alex Cord as John Thunstone. It shrank the character list, upped the sitting around talking and upped the amount of guys in rubber suits. It's a "meh" adaption of Wellman's work. It compressed the wrong things and drew out the exposition over like 20 of the 22 minutes of run time. That being said Alex Cord makes a fine John Thunstone, he's who I picture in my head when I read him and Laraine Newman really tries to make her character something, but the writing and direction let her down which probably has a lot to do with the lack of time and money I'm sure working on "Monsters" had to deal with. It's available on Amazon Prime and on YouTube. 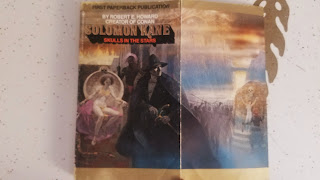 "Rattle of Bones" and "The Castle of the Devil" by Robert E. Howard - Howard's obviously the man. You don't create Conan the Barbarian and not be THE man, but his other creations are often lost in the Barbarian blitz. I, like a lot of high school boys, went through a Conan-phase. Blood, guts, boobs, Franzetta covers, and unrelenting adventure is a spicy combination. As I got older, I grew to prefer his other characters like Kirby O'Donnell, Sailor Steve Costigan, John Kirowan, Steve Harrison and SOLOMON KANE! I set off to read just "Rattle of Bones", but it was so short that I just found myself halfway through "The Cast of the Devil" before I knew it. Reading Howard is like potato chips, I suppose. Anywho, I'm sure I've read these stories before, but I remembered nothing of "Castle" but remembered most of "Bones. Both the tales have old grumpy-gus Solomon Kane in The Black Forrest meeting a new friends, fiends, and enemies. Plus, skeletons, spooky happenings in castles, having copious sword fights and thwarting evil at every turn. "Rattle of Bones" is a very effective, very short horror tale while "The Castle of the Devil" is a bit sluggish even in a few short pages. But sluggish Howard is still going 50 miles an hour faster than most. 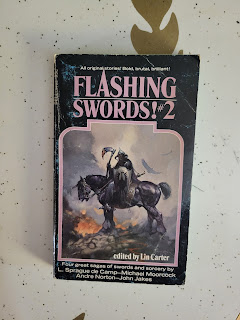 "Ghoul's Garden" by John Jakes - Speaking of Robert E. Howard...John Jakes own barbarian hero Brak may be easy to dismiss as one of the dem Conan clones that popped up in the 60's and 70's but Brak is pretty powerful stuff. You might not want to discount him too soon. John Jakes is an interesting writer, before he was simply known as a "historical epic" kind of guy he wrote everything from sci-fi to mystery and crime. His short story collection "Crime Time" is chocked full of detectives, spies and the like. Plus, the books about his diminutive private eye Johnny Havoc are a hoot. "Ghoul's Garden" is a Brak full of asshole Frairs, squat and freakish wizards, a hot actress, monsters, portions, spells, gore, big robot terror-birds and a maze-like garden inside a silk handkerchief. It is so jam-packed that in a lot of ways it reminded me of an 80's cartoon episode, something like "Thundarr the Barbarian" or "He-Man" only R-Rated. I hadn't read a Brak tale in a while and now I'm going to have to keep up the pace.
Posted by bloodyspicybooks at 9:53 AM