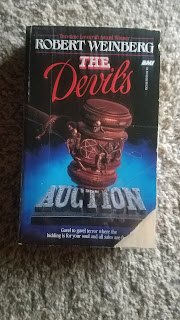 I've read a few books with Robert E. Weinberg's name on the cover, but "The Devil's Auction" is the first book I've read BY him. "Tough Guys and Dangerous Dames" and "Hard-Boiled Detectives: 23 Great Stories from Dime Detective Magazine" are the cornerstones of my love of pulp fiction in general. He edited tons of anthologies, fanzines, non-fiction, books and even comics plus he owned a bookstore. My kinda guy. I've collected a lot of his fiction work over the years but hadn't ever got around to checking it out.

"The Devil's Auction" is pure-pulp. Personally, I can think of no better compliment. What we have here is a mysterious auction held every generation in a magical house deep in the woods of Illinois (!) by a seemingly unageing man. What's up for auction? Maybe immortally, maybe something else. No one knows, after all no one ever comes back from the auction. After the murder of her sorcerer father for his invitation to the auction...by a werewolf...Valerie Lancaster enlists 'nam vet and karate-college professor Alex Warner to help avenge the death of her father/his friend. There's more werewolf attacks, a golem, magic spells, straight-out-of-B-movie characters, books of spells, talismans, sexy sex, hidden history, Countesses, bodyguards, and true love. It's jam-packed. Weinberg has a nice clean, if a bit unremarkable writing style; nothing flowery or too showy just solid workman-like prose. I often struggle with horror novels. I just really prefer my main characters to be proactive instead of reactionary. So, pulp horror is the way for me to go, capable people going up against supernatural forces and this is a good example of it.

Though written in the 80's it really has a '40s vibe going on, in fact it might have worked better as a period piece. Outside of some modern references, the centuries old mysteries and monsters makes it feel like a lost Universal Horror picture. Or a book that could have been serialized in "Weird Tales."  Weinberg's love of pulp is clear. The action moves quickly, mysteries unfold at a reasonable rate and the characters are more archetypes than "characters" but have enough personality to root for. I'm glad I already have a Wienberg library including the sequel to this "The Armageddon Box." Plus "The Black Lodge" and "The Dead Man's Kiss." None of his books seem to be available as eBooks, but there's audio by Radio Archives and the paperbacks/hardbacks are pretty easy (and cheap) to track down.

Posted by bloodyspicybooks at 10:49 AM