QUICK SHOTS: The Protector #3: Reddy or Not by Irwin Zacharia 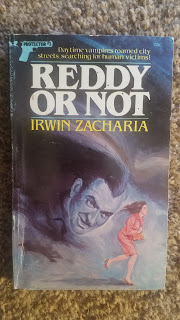 Carousel books was a little publisher back in the late 70's/early 80's. A low rent-outfit that may or may not have been a money laundering scheme (that's the rumor anyway) who tried their hand at the popular paperback genres of the day. Noted Mack Bolan author Mike Newton published a few books with them, one of which "Terror at Boulder Dam" I covered a while ago. Plus, some westerns as Mark Kozlow and the Intersect "team-mission" series as John Cannon. These a slim, quickly written and quickly published books but offer a fair amount of fun. I get the feeling with these smaller publishers there was freer range for writers. No one's looking over their shoulders and they're working so cheap they might as well entertain themselves. Or sometimes they'd just pound out wave upon wave of pure crap. Irwin Zacharia certainly seemed to be entertaining himself. He certainly entertained me. I couldn't find much out about Zacharia on the internet, so if you got in info hit me up! 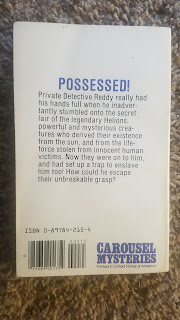 "The Protector" series stars Irwin Martin Reddy, or I.M. Reddy (get it?) a 300-pound Jewish private eye who practice Sumo wrestling, is diabetic, drives a sweet Barracuda, has an eye for the ladies and packs a Louisville Slugger. Oh, and he's not really bothered by anything that goes bump in the night, demons, vampires what have you. Mack Bolan, he is not. But he's a fun, wild character to hang around with and Zacharia (as Reddy) narrates this tale of his ques to save a woman from a pack energy vampires. In standard P.I. fashion, Reddy is hired to track down the missing woman and this being #3 in the series, he's unfazed when it turns out she's been turned into odd-kind of vampire. Two fights against the supernatural will do that to you. So, Reddy tackles a bunch of near superhuman creatures (they call themselves Hellions) who live in a specifically fitted hotel to meet their quasi-vampiric needs. The Hellions basically suck out people's energy with little suction cups that appear on their body, they can shape-shift and a booger to kill. They are a neat little touch and steer the book away from the standard blood-sucker tale. The whole thing is real tongue-in-cheek, Reddy is a goofy guy who happens to be a tough SOB when he needs to be but would rather sit at home and watch a movie with a refreshing TAB cola than fight monsters. The breezy narrative style made the book fly by and I'm eagerly watching my mailbox for the other couple of Zacharia's I managed to track down. It's a wild mix of Martin Meyers Hardy books, Jory Sherman's Chill novels with a dash of Kolchak the Night Stalker.

Books like these are why I delve deep into the weird and wild world of low-rent publishers. A lot of the time I don't even finish the books but every now then I come across the gem, an uncut gem but a gem, nonetheless. Like most of these types of books, the print run was low, and the prices are kinda high, which is a shame. I pieced together this list of Zacharia's work as Zacharia anyway, there might be pseudonym work. It may or may not be complete so let me know if I'm missing anything.

(A Mob-Avenger series about a guy named Will Powers)

(I.M. Reddy's fight against the supernatural)

Posted by bloodyspicybooks at 10:55 AM