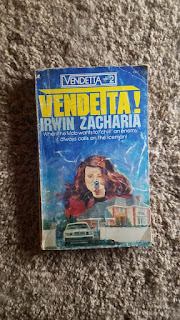 Well, my previous adventure into the small-time publisher Carousel got me to buy a fistful of slightly overpriced paperbacks. Not that I'm complaining. Money's just money but books can be priceless. So, I got some books with titles like "Mafia Rock and Roll," "The Silent Murder," "Twins in Trouble," "After the Kill," and "Mozambique Agent" headed toward my house. Surely a stack of trashy good reading. Irwin Zacharia's "Reddy or Not" was a total blast, a genre-bending tale of a sumo-wrestling Jewish private eye fighting energy vampires. I have another one "Princess of Darkness" on deck, but I wanted to check out one of his other Carousel series first before I dipped back into the Reddy series.

Okay, so this one's got the laziest title I've ever seen. The SERIES name is Vendetta, the first book in the series is named "The Murder Club," and the second entry is just named Vendetta. I've never seen the 2nd book have the series title before. Just a nice example of the slap-dash nature of low-rent publishers. Zacharia must have had an affinity for puns and puny named. I.M. Reddy or in Vendetta Will Powers. I wonder what Landsharks real name is. Will Powers is pretty standard paperback hero in the wake of Mack Bolan. He's a 'nam vet with anger issues and a slightly unsustainable lust for killin' who worked as a private eye after he got home. But now he's a "street mercenary" working for the "little guy" against the mob or other baddies. He works for money not just ideals though. He's a bit like a one man "A-Team" as played by Mike Hammer.

Anyway, "Vendetta" is about Powers taking down some mobsters on behave of a widow whose husband was unjustly murdered. After bloodily armed robbing a mob-money drop and starting a war between a few rival gangs Powers gets wrapped up in one sectaries quest to avenge her sister after a brutal attack by her mob-lawyer boss. What follows is a lot of bits of action, scenes of worried Mafioso's, gun fights, murders, Power's endless supply of silenced (nice trick) .44 Magnums blasting people away, and an explosion or two. It's clearly the second novel, as the first is referenced and there's plenty of set-up for the next (didn't happen) instalment. The biggest problem is that you don't get to spend enough time with Will Powers himself, we bounce between sets of characters and Powers swoops in every now and then to bust a cap. It's not the best way to sell a series character.

It's a "fine" book. Nothing really too exciting or interesting, it feels like Zacharia playing it straight. Keeping his wildness (as shown in the Reddy) to a minimum. Probably for marketing reasons. It's much easier to sell a book that's right down the middle as opposed to left field. There's still sparks of goofiness and tongue in cheek sprinkled throughout enough to make it entertaining. I'd still like to read the No. 1: "The Murder Club" and the rest of Zacharia's catalog, but it'll be a long hunt since I already bought a copy of all of the ones I could find. So, if you have any you want to part with I'm sure I'll buy 'em. On a side note, this particular copy has handwritten notes indicting what time a previous reader read to before they went to bed and marking exactly where the stopped. They usually went to bed around 10:45 and sometimes stopped in the middle of a sentence to get some ZZZZZ's. It might be the oddest thing I've ever seen written in a book and it's surely the work of some psycho.

Posted by bloodyspicybooks at 11:46 AM