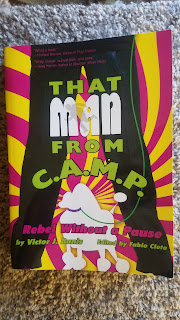 "The Man from C.A.M.P." is a 10-book series put out by Greenleaf between 1965 and 1971 all but the final book was written by Victor J. Banis under the name Don Holliday. They are pretty revolutionary books but first a little history. So, it's the late 60's and James Bond was the hot ticket. Scores of imitators arose both in cinema, T.V. and on the paperback rack. Some were stone-serious books, but as the bloom was falling off the rose the spoofs started popping up. I think a lot of people forget how big of a thing "The Man from U.N.C.L.E." was because a lot of these spy-comedy novels more closely resembled U.N.C.L.E. than Bond. I guess it's easier to poke a little fun when you have a weekly program to tune into as opposed to a two-year wait between movies. Then there's the added sucker-punch to pop culture that was the '66 Batman show suddenly it was ever-so-hip to be in on the joke. Here's a short list that is far from complete: "The Miss from S.I.S." by Robert Trailins, "The Man from O.R.G.Y." by Ted Mark, "The Lady from L.U.S.T." by Rod Gray, "The Girl from PUSSYCAT" by Ted Mark, "The Man from S.T.U.D." by F.W. Paul, "The Man from T.O.M.C.A.T." by Mallory T. Knight...and that's just a few and honestly from the samples I've they are usually pretty lifeless affairs. Bouncing from sometimes real weird sex-scenes to limp second-thought action. If you get a "Coxeman" by Michael Avallone you're in for a good time and Clyde Allison's "The Man from SADISTO" books are pure lunacy in a great way, but pas that I haven't found any to justify their usual high prices.

I discovered "The Man from C.A.M.P." via the SADISTO books' cover artist, the wonderful Robert Bonfils who did covers for both series. The man from C.A.M.P. himself is Jackie Holmes, a millionaire with a fleet of bitchin' vintage cars, is a master of disguise, a crime-fighting organization behind him, a killer poodle, a jeweled derringer and vast knowledge on anything that might come up. He's also gay and on the prowl. Jackie was the first gay man action hero and still really only one of a few to this day. He's a fun-loving character, he really struck me as a combination of Doc Savage and Napolean Solo as played by Peter (Jason King) Wyngarde. C.A.M.P. is a one of those general crime-fighting agencies that populate paperback books. C.A.M.P. works with other government agencies when there's a threat to gays worldwide ready for any threat. Jackie's apart of their "Police Bureau" and with a little help from his friends in the first book he teams up with T-Man to track down a synthetic diamond ring that's involved with the gay community. Along the way there's car chases in vintage Bugatti's, gun fights, torture, drugging's, tons of gadgets, fist fights, helicopters seedy bars and hair stylists. Banis keeps things moving a brisk pace, dropping action, clues and red herrings with aplomb. And yes, considering these are sleaze "porn" books there is a few scenes of gay sex and much like a Bond novel Jackie always gets his "reward" at the end of the book which is usually his straight partner. It's all very tame by today's standards but it's there, I suppose that's enough to turn some people away which is a prudish shame cause it's really a small part of the novel.

It's clear this book was written quickly. It has a stream-of-consciousness vibe going on, but it's done in such a fun, camp (get it?) and pop art way that it's a total blast. It's an important series too, I'm sure plenty of gay men back in the day absolutely loved having an unabashedly gay hero for themselves. Past that it's one of the better written of the spy-spoofs of the era, easily ranking with Clyda Allison's top-shelf SADISTO books. I read the first one in an omnibus that came out a few years ago as the originals have a hefty price tag. But the omnibus is a great package with extras like interviews and forwards explaining all of this a lot better than I can. The whole series (the Banis ones anyway) has been either reprinted in collections or as separate editions for eBook and print-on-demand, so they are at least easily readable. Obviously, it's probably not a book for everyone, if you like your spy's serious and/or straight and can't budge on either, you're missing out.

Posted by bloodyspicybooks at 11:09 AM