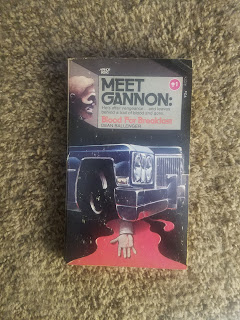 The Gannon books are fairly legendary in Men's Adventure/Trash fiction circles. Hard to come by, absolutely insane and balls-to-the-wall entertaining. There's nothing quite like a Gannon book. Dean Ballenger only wrote a handful of novels, three of which are about this little "tiger" of a man with his revolver and spiked-knucks taking a bite of the rich folks for the common man. A blue-collar avenger. They are the sleaziest, most violent, batshit B-Movie that never made it to the grindhouses on 42nd street. They are Gannon.

Either Ballenger was putting us on, or he was a dude you probably didn't actually want to meet. Little to nothing is known about him (that I can find, as always let me know what you know) other than he wrote some westerns and some stuff in the sweat mags of the day. In #1 Gannon is on a quest to skrag everyone involved in a brutal attack on his sister. He's got a quick and vague background as a Marine, cop and present security chef for a shipping yard. Other then he likes steaks and need to boink women at regular intervals you learn pretty much nothing about him. He does come from the Mike Hammer school of maim or kill and call the cops as opposed to the Johnny Rock school of kill everyone and split. He doesn't consider himself a psychopath, but that there is open to debate. The novel moves real fast, hoping from beatings, shootings, explosions, hit-and-runs, blood, sexing, and shaving and showers. It's almost episodic in a way, Gannon gets in a scrape and then extricates himself in the most violent way possible. The guts-and-gore is cranked up to ELEVEN in the books. That and the odd, 30's-40's (or just plain made up) slang adds to the fantasy quality to the novel. It just seems like a whiskey and uppers fever dream pounded out into a book for a couple of bucks. That being said it's a masterpiece in that sub-genre. Now, it's not for the faint of heart of the easily offended. I read the trashiest stuff and some of the sentences in "Blood for Breakfast" were hard to take in. Sometimes nastiness oozes out from the binding. Plus, personally I have toast for breakfast.

A lot of these type of vigilante books are made of two-camps. You got the straight knockoffs of "The Executioner" like "The Marksman" or "Soldato" or "The Liquidator" or you got the ones that are really aping Brian Garfield's "Death Wish," like "The Vigilante," or "The Revenger" doing a more 'serious' approach. They both usually tackle the mob. Gannon isn't really in either camp. Ballenger's opinion is that white-collar crooks are the ones who really need to be taught a lesson. The Mafia? Eh. It's all out class warfare. It's a kinda half-ass communist manifesto. And in terms of brutal action only Russell Smith's entries in "The Sharpshooter" and "The Marksman" are close. Barry Malzberg's "Lone Wolf" books may get fairly crazy, but I'm only one in so far. They are for a small handful of wild-book-people whose taste has long since gotten washed away by mountains of questionable fiction. That or the violent, criminally insane maybe.

It's easy to see why some many people talk about the Gannon books, from James Reasoner on his blog, to the Glorious Trash or even the awesome filmmaker S. Craig Zahler on his Goodreads page. It's a notable book that's so off-the-wall that it would not be written today and will probably never be republished making it an enticing package. Like having the Ferrari trash fiction. They are ridiculously hard to come by. I lucked into the 2nd entry and felt compelled to finish off the series. It took me so penitence and doing but I got them all for a fairly reasonable price but well-more then I usually pay for an old paperback. Like a drug, I don't know if I'd recommend the Gannon books to someone without a cheap taste, cause they are not for everyone. I love that I have them and I'm sad there's only one more to read but mileage varies.

Posted by bloodyspicybooks at 1:18 PM