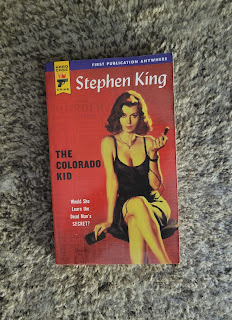 I think most readers at least sample Stephen King. From the ones that are supposed to be "high-brow" with their "literature" to the "casual reader," who just want a nice story. And the thing is that he works for pretty much everyone. I know that there's people out there that don't like his work. I just haven't met many and I'm sure they would all be those kinds of folks who "don't like horror." Well, here's one for them. A simple tale of a mysterious death. I was all aboard the Hard Case Crime train when "The Colorado Kid" came out, pretty much buying all of them as they came out and reading most of them as I got ahold of them.

But I didn't read King's. I don't know why. I was fan, I mean I was fan from my teenage years when I spent a few months pouring through his early back catalog. He's nostalgia for me and a lot of people, capturing a bit of time in our life when horror movies and books were everything. Simple times of blood, gore, thrills, chills and shattering suspense. Salad days. The King books were in my house for as long as I can remember. My mother was a fan, so there they sat, fat little paperbacks with bold colors and dark black covers. Striking images that are lodged in my mind from way back as a child. Back when you wanted a little spookiness in your life, but the actual stuff was far TOO SCARY.

Man, that monkey on the "Skeleton Crew" cover. Boy howdy, what a creepy little fucker.

It sort of boggles my mind I didn't read this sooner. Maybe it was that his newer stuff post-90's didn't really connect with me, maybe I didn't like that it was a mystery novel by the master of horror. Maybe I'm just an idiot.

"The Colorado Kid" is a mystery novel. Well, it's a novel about the nature of mystery. About why people seek the mysterious in their life. The book takes place in Maine ('natch) and is about three reporters, two old men and one young woman and a mystery ('natch) within the framework of the novel. The titular "Colorado Kid" shows up under odd circumstances on a beach, a near impossible occurrence since we find out his only have hours to travel from Colorado to Maine. King throws curveball after curveball at you, solutions that mess up your reader's sleuthing and he probably likes the idea of you (the reader) scratching your head at the tale.

As I said this is about WHY people try to figure things out. It's about the characters, like all of King's books, the characters are the draw, and the rest is just fine fun. Dave, Vince and Stephanie sit around and talk the whole book and that's why it's engaging. They are people you'd like to get some lobster rolls or a coffee with and bullshit. There's no action, there's not really much suspense and the murder happens "off screen" but it's a thrill-ride, nonetheless.

In his afterward King says that this would be a divisive novel. I can see that, the "solution" which I won't spoil is either going to work for you or it's just not. But that's the nature of mystery. King's an institution. I imagine it's weird to be a man and an institution, but he does it with humor and grace. I enjoy hearing him speak as much as I do hearing his characters talk. If you take the novel as a long afternoon coffee with Mr. King, I think you'll enjoy it more.

I haven't read the other two Hard Case Crime King books; they seem to lean into his more usual territory i.e., spooky shit. But that won't stop me from trying them out. This one was pleasant little trip into King Country, man, it's nice to be able to read a Stephen King in a couple of hours. That doesn't come around much.

Posted by bloodyspicybooks at 9:15 AM