A Tale of Two "Challengers of the Unknown" by Ron Goulart 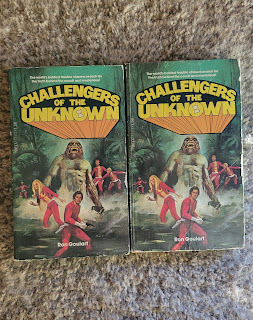 After the passing of Ron Goulart a while back, I knew it wouldn't be too long before I pulled one of his books off the shelf and gave it a whirl. He's one of my go-to-guys for light, fun adventuring and mystery. Besides being a helluva readable wordsmith he was a great historian and his books on the pulps and collections are top-notch. "The Hardboiled Dicks" sparked my love of Black Mask and Dime Detective. Then you got his John Easy books, his entries in The Avenger books, mysteries starring Groucho Marx, the Vampirella's...I could go on and probably will.

Goulart was a long-time comics fan and historian. It just makes sense that he adapted comics into novels, The Phantom, Flash Gordon, Captain America, the Hulk...and The Challengers of the Unknown. I stumbled upon the Challengers via Joseph Loeb and Tim Sales's "The Challengers of the Unknown Must Die" which is a FANTASTIC run on these pretty much forgotten characters. So, The Challengers are basically big monster/bad guy fighters who go out and be adventurers to help people after almost dying and living on "borrowed time." There's Prof, Rocky, Ace, Red and June. It's a clean set up for comic booky-adventures. The early comics were drawn by Jack Kirby and a little later the set-up might have helped the Fantastic Four along, too. The Challengers don't really have a big footstep in the DC universe anymore (or ever really) so it's kinda surprising that this got a paperback. I mean, where's Cave Carson's book?

Goulart was an old hat at this kind of derring-do when he tackled this book, and it shows. It's a well-oiled machine of a pulp novel. Little bit of mystery, little bit of globe-trotting, little love-stuff, action and banter. There's enough of a hook for each character for them to bicker at each other and enough bad guys for them to fight. Basically, they go down to down to South America to get tangled up with a swamp monster and a political hot-bed of armies, spies and presidents and it just zooms right along to a fairly wide conclusion.

Look, none of this was taxing. It's a simple, clear-cut pulp novel. Doc Savage could have had this adventure, the weird late-60's Shadow could have had this adventure. Or Goulart's own take on The Avenger team. It's not going to change your life, but you'll have a brisk little thrill-ride for an hour or so and that's what you need sometime. Goulart was an unpretentious writer, just out to entertain you. It's probably not his best book (those John Easy books are hard to beat) but if you were wondering what a 70s TV movie of the Challengers of the Unknown might have been like, here ya go. And that hits a lot of the right buttons for me.

Funny thing happened to me on the way to writing this review: I needed TWO COPIES of this slim Dell paperback to get it done. Why, you ask? Well, my first copy stopped with thirty pages to go and filled the page count with the previous thirty pages like it was VCR stuck on rewind. So, I had to wait for the mail to send me another copy for my resolution. It was like a proper Cliffhanger Serial. That's the first time I have ever had anything like that happen with a paperback and I was especially surprised that it was a Dell and not a Leisure or Manor book that did it.

Anywho, Goulart is just one of those divisive writers. I love his work, or mileage may vary. But isn't that just the way it goes?

Posted by bloodyspicybooks at 11:02 AM