Me, Ralph Dennis and Hardman #8: The Deadly Cotton Heart 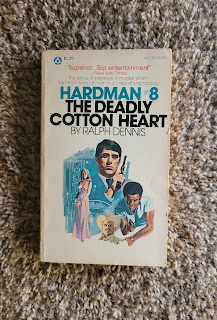 They're like an old bar-friends at this point, familiar on the surface but the details of past encounters are lost. That's the Hardman novels now. It's a wonderful thing, I almost get to read them again for the first time. Ralph Dennis's Hardman books were a turning point for me in a lot of ways. They made me realize that there might be good shit (real good shit) in those old paperbacks with numbers on the covers. They clued me in to detective novels in settings that weren't New York or L.A. And they taught me a lot about clean, tough writing with hard-bitten action that moves swiftly, makes sense but isn't too showy. They're all gems. Dennis should have been a major mystery writer after knocking out twelve of 'em in the FOUR YEARS. That's some damned fine writing to be squeezed out between beers in that short of a time span.

Jim Hardman and Hump Evans. Yeah, it's a bit funny when you say it out loud. I can see why some folk might have past them up, not quite Pepperoni Hero level of goofy names but it's just shy of it. The awesome action-packed covers were a bit of a lie too. Hardman wasn't a squared jawed man of action, but a pudgy ex-cop who I suspect looked a lot like Ralph Dennis. Hump was pitch perfect on the covers though. There was action but it's not an "Executioner" or a "Death Merchant." It's a dark alley in a Men's Adventure world. Spillane but a bit less of a fever dream. Hammett in leisure suits. What the Hardman books really are, and they are the closest thing to a pulp-version of the work of James Crumley. C.W. Sugrue and Milo Milodragovitch would throw back massive amounts of booze with Hardman and Hump.

I've said before I came to mystery fiction via Joe R. Lansdale, Lansdale does an intro for Brash Books reprints (doing the Book God's work), and he says that there's a little bit of Hardman and Hump in my good buddies Hap and Leonard. I've known plenty of beer-drinkers and hell raisers. See, I'm a Kansas guy. That ain't the south, we're kind of a different breed up here. John Brown, flat-fields, western scenery and all that. But you grow up in a small town in Kansas you know guys like Hap and Hardman. Hell, my dad was like Hap in a lot of ways: an overgrown hippie country boy, I guess I didn't fall too far from the tree. You don't often get authentic take in crime fiction about a guy who you've sat next to on a bar stool and drank the heart of a fine spring day.

Back then I had been on the hunt for the Hardman books for a while, tipped off by the always useful Thrilling Detective Website, but even back then they were hard to come by. Now it's nearly impossible. I found myself in Jacksonville, Florida in a fine Hawaiian shirt bumming my way around a conference on sports broadcasting that I had no business being there for. But the ride was mostly free and so was a lot of my time. I stumbled around town, rode a monorail and found myself in a book shop. At the end of the trip, I left with a nearly overflowing suitcase full of books. A lot of them were by Ralph Dennis. I scored most of the series in one foul swoop and read three or four of them that weekend in a hotel bar or a conference hall while fleecing cocktail shrimp. They seemed like the book I had wanted to write since I started liking private eye fiction (I've written a couple, I'll get around to getting it printed this year, hopefully) and there it had been done for years.

"The Deadly Cotton Heart" was read in that lost-booky weekend. Luckily that was many moons ago and most of it was lost in my brain, so it was a nearly new book for me. Boasting one of the best titles in the series "Cotton Heart" is a strong entry in a very strong and consistent series. Jim is asked to play the part of an out-of-town-killer for a police sting operation. He doesn't want to, and he's got the right idea cause that's where the trouble starts. The sting goes wrong, puts Hump and Jim in the hot-seat and sets them off looking for a missing wife. They head on down to Tennesse to get into more trouble with a road-side madam, local police, racists, and an old murder. It's a pleasant twisty little action/mystery the way they don't make 'em anymore.

It's nice to know I got all of the Hardman's to re-read again and again. They were getting hard to come by, but the always excellent Brash Books re-released them not too long ago in handsome paperbacks and eBooks. Ralph Dennis was sadly under-appreciated in his own time, but luckily nowadays he's getting the love he deserved, thanks to Lee Goldberg and Brash Books. Hardman and Hump are companions for my writing life, I often think of Ralph Dennis's clean, hardboiled writing when I'm doing my typing and I try to learn something.

Posted by bloodyspicybooks at 8:07 AM