I've touched on, more than once, that Joe R. Lansdale is a corner stone in want has made me the reader (and writer) that I am today. Probably, much to his chagrin if he ever caught word. It's an odd relationship reader/writer, it's all a once more personal and less personal of a connection than say being struck by a movie star. You spend a lot of time inside someone else's head when you read a book, but you don't see them, you don't know how they move or what they sound like. After middle school's worth of reading Alexandre Dumas, James Bond and The Saint novels, I had switched my recreation time to horror flicks and vintage muscle cars. The bloodier and the faster the better.

Somewhere down the two-lane blacktop, I got wind of "Bubba Ho-Tep" which put together of two of my favorite horror-guys, Bruce Campbell and the director Don Coscarelli and it was taken from a short story by a fella named Joe R. Lansdale. An old Elvis fighting a mummy in an East Texas nursing home? Hell, I was sold. My local library had a copy of "Writer of the Purple Rage" that the novella was contained in and boy-howdy I was hooked. Soon, I read most of his stuff I could lay my hands on. Some of them in by dashboard light in my hot rod 1968 Plymouth Fury coupe. I must have been out on the highway avoiding The God of the Razor and staying out of weird Drive-In's.

Lansdale was the first writer I encountered that seemed to understand life in the small-town/country way with a vernacular to match to boot. I knew guys and gals in flesh in blood like the ones in Lansdale's words. When I read a Hap and Leonard novel, I imagine my late-father as Hap, he was cut from the same country-boy/hippie cloth. An ass-kicker too, 'natch. I guess Lansdale taught me that writing can sound like anything, that it doesn't have to come from the pen of an English ex-spy or some other stuffed-shirt. And he wrote all the things I liked, mystery, horror, sci-fi you name it and it all sound exactly like Joe R. Lansdale talking to you, spinning yarns making you laugh and then turning it on its head and making a shiver run up your spine. 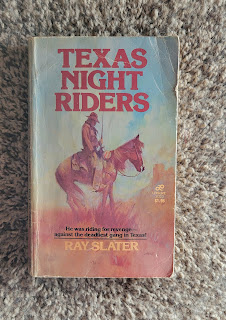 "Texas Night Riders" came out in 1983 from Leisure books with Lansdale writing under the name Ray Slater and it's an all-out tale of western revenge in under 200 pages. Before this he wrote a porn novel called "Molly's Sexual Follies" as Mark Simmons (with Brad W. Foster) and his shattering novel "Act of Love," which is one helluva book. Then came out with a one-two punch of "The Magic Wagon" and "The Nightrunners." Whew. Anywho, "Texas Night Riders" might seem like a typical western. Farmer Jubil Rains used to be a solider in the Confederate army and now is living peacefully with his wife and son...you see where I am going with this, right? 'ol Jubil has his son murdered before his eyes by three bandits and plugged buried alive in the coffin of his recently deceased wife. Well, Jubil does what most cowboy heroes would do and straps on his six-guns and heads out with revenge on his mind. Along the way he comes across the baddies now leading a pack of the titular Texas Night Riders, masked riders out to push people off of their land. Jubil takes up with big time farmer, Brennan and his men in order to kill the nasty Thorton who ran his son through with a saber. 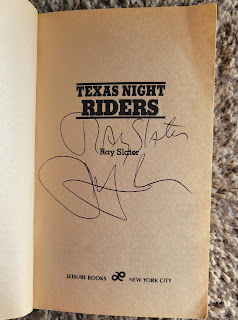 Jubil is a fairly conventual western-type hero, a quiet man out for personal revenge. Lansdale's leads are usually more colorful and interesting characters, but this after all was written for a Leisure pulp-paperback and Lansdale gave them a pulp-paperback hero. He's certainly not a bad character, he's just Clint Eastwood on the page. Thinking about it, what more do you need? This is still clearly a Lansdale novel; his quirks and themes seep in through the mud and the blood. The farmer's daughter, Mattie is a tough lady, like a lot of Lansdale's ladies, who can handle the action with aplomb. While all the side characters are stock players, Lansdale makes them tough, funny and wild in their own ways. And the action is all Lansdale, brutal and wild and at times reaching his early "splatterpunk" levels of gore. There's a hint of horror in the mix, early on the town drunk refers to Jubil as a zombie, all dead inside but walking. There's a bit of "The Night of the Living Dead" as the Night Riders siege a walled-up farm in the dead of night. It's not a book that is going to be amongst the best of Lansdale's work, but it's a fascinating look into the foundation of the writer he became and what was always in there. 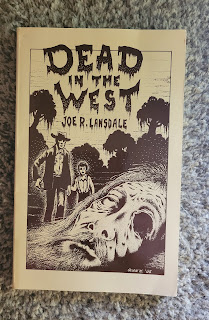 A couple of years later Lansdale returned to the western, albeit with a less traditional tale with "Dead in the West," starring a rascal of a preacher-man named Jebediah Mercer who lands himself in Mud Creek, TX to try to get some soul saving done. It's a good thing he's a pistol-packin' preacher cause soon the dead start to rise, and he's got to stand up and fight. "Dead in the West" is a wonderful little book, seriously little, the only drawback is that there's ain't much of it and you want more of it. It seems like it's ripped out of the pages of "Weird Tales," a fever dream about putting Lovecraft, Robert E. Howard, Roy Rogers and George A. Romero in a blender then spill it out over a typewriter. Little tips of the cowboy hat to "The Necronomicon" and such put you in the right mindset. The voice is (as always) pure Lansdale. It's funny, it's profane, its gross and blood. So, you know...pure Lansdale and boy howdy how I had fun with this one. 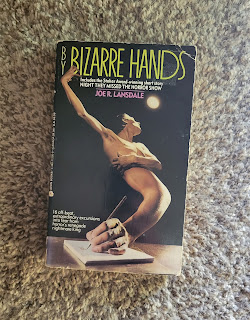 Then a few little years later Lansdale took the western vibe into the apocalyptic future filled with zombies in "On the Far Side of the Cadillac Desert with the Dead Folk." It's a novella which is its only downfall, there should be more of it, there should be a near endless supply of stories in this world. I read this many, many years ago and in rereading it (and knowing more and more about Men's Adventure fiction) now it makes me long for a Lansdale M.A. series penned in the 80's about this bounty hunter named Wayne and his '57 Chevy wandering the new terrifying west. It's a place of (somewhat) domesticated Zombies, lawless border towns, the vague aftermath of the "Chevrolet/Cadillac war" and all measure of scoundrel. If you're not aware Lansdale did contribute to the "M.I.A. Hunter" series with always excellent Stephen Mertz but if Lansdale had had his own series product the Post-Apocalyptic Men's Adventure genre would have been the one, he was most suited for, even over an action series or an adult Western. Sigh. If only. A reader can dream. The novella itself is top-shelf, naughty, vulgar, non-stop action fun piled to the brim with exuberance and wild little touches. Shit. There need to be more of it.

There's no other writer like Joe R. Lansdale. I'd imagine there's folks that wouldn't dig what he is putting down. There are always wrong people in the world. In digging further in his back log I'm stuck by the ferocity of his work. Not just what he puts on the page, then emotion behind it. They read like something he HAD to put down on paper. The young and hungry author syndrome. Lansdale has kept the spark throughout the years, though he's gotten a bit more respectable and written some books that a truly brilliant, easily better then pretty much whatever the "big literary" books are (I'm looking at you, "The Bottoms" and "The Ticket") but he always never lost his spark of weirdness, thank God.

Posted by bloodyspicybooks at 7:05 AM