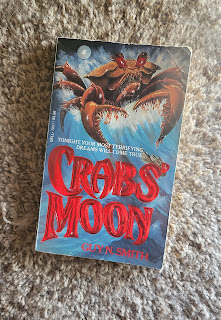 After reading my last Guy N. Smith I couldn't resist more. I usually try to break up my reading/reviewing to not clutter it up with the same author otherwise this might turn into a Michael Avallone blog. I'm getting on a major horror kick (it usually happens as summer approaches) and my thirst for monster mayhem was unquenchable as now I'm both writing a monster novel and in the very, very, very, early stages of a possible low-budget feature length horror film being made from a script I wrote. I'm also opening a vintage toy and bookstore, so my time is limited for reading and I know that when I pick up one of Smith's book the fat is trimmed, and the pace is cranked to eleven making for a pleasant coupla hours of blood, guts and killer animals.

So, Guy's legendary Crabs series. I mean who wouldn't dip their toe back in the world of cow-sized killer crabs first? The Crabs series is what Smith is most known for, seven books spanning from 1976 to 2019 plus a few chap books, some short stories and even a graphic novel. Oh, and an "unofficial" movie adaptation "Island Claws" written by The Creature from the Black Lagoon himself, Ricou Browning. That's a helluva run. They are unfortunately, like a lot of groovy horror novels, hard to come by. I lucked into a few of the Dell editions over the years and then paid a lot for some of the others. "Crabs: The Human Sacrifice" still lurks out there on the shores of bookshop shelves for me to find. The crab with the knife really whets my appetite. I really should have done my research since "Crab's Moon" is a semi-prequel/direct-sequel to the first "Night of the Crabs." It takes place during the first invasion of the crabs, but just in a different place. The problem is I only just got "Night of the Crabs" and haven't cracked it yet. It was a bone-head move, I thought I was going to save #1 for a special reading occasion I guess.

Anyway, I read "Crab's Moon." The Guy N. Smith hallmarks are there, sex, violence, and gore as we bounce around between a few groups of generally unlikeable people trapped on an amusement park island that the military is defending from big 'ol crabs. There are terrible millionaires you hate, love triangles, distrust of authority, big guns plus explosions, one-night stands, dirty hippies, and delicious crab meat. It's a fast and fun read, but since the hero of "Night of the Crabs" ya know sorta wins that book, this one is a little anti-climatic. It's still fun enough to read, it'd be fun to read it back-to-back with #1. Now, these are pure-pulp and crammed with some terrible people which makes it delightful when bad things happen to them, don't go in expecting a hero or a heroine to love. Women especially have a rough go in these books, women characters are generally only there for sex and then to die. That's just a warning if it would bother you. Smith is playing with tropes and that there is some big-time low-brow horror tropes.

Guy N. Smith is just one of my go-to guys. Should probably be one of YOURS too.

Posted by bloodyspicybooks at 7:43 AM