QUICK SHOTS: Race Against Time #5: Duel for the Samurai Sword by J.J. Fortune 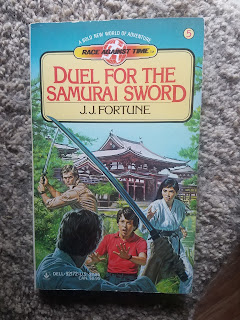 Many years ago when I was shorter I very much enjoyed my school's libraries. I think that's where a lot of my life-long book reading journey started. Also my book "hoarding," I distinctly remember checking as many books out as I could and not reading all of them before they had to go back. It started in elementary school, but what I vividly remember is my small town's middle school library. The white metal shelves in the middle and up along the walls, the shining metal built in book ends, goofy posters of Garfield telling me reading was cool and all the various sized books. There I found Sherlock Holmes and The Three Musketeers (among many others) and I always had my nose in one of those paperback-hardback Frankenstein's. I read contemporary ones too, R.L. Stine's Fear Street (and the knockoffs) and the fairly new Hardy Boys Casefiles (as I have reviewed on here before) and Nancy Drew Files both of which started in the 80's as the slightly older more "mature" version of the characters. To be fair I only read the Nancy Drew one's to help me figure out what girls were. I guess it helped. I married a woman who loves Nancy Drew, go figure. But also random books like the "Race Against Time" series which had haunted my brain all these years.

I had vague notions of a novel about a kid and his Indiana Jones-like Uncle who rushed around the world having adventures, but couldn't remember much past that. No titles or the author. Just something lost in the my book-addled mind. Then BINGO one day while checking the new arrivals at one of my local bookstores a tiny-little spine caught my eye. "The Duel for the Samurai Sword," the 5th novel in the series called "Race Against Time" by J.J. Fortune. The gist of the series is that a kid named Stephen and his Uncle Richard Duffy get into adventures and have to race against the clock to return Stephen home before his parents find out about all the derring-do they do, do. I don't remember any sword fights or hunts for Atlantis or having a cool gadget watch when I was getting baby-sat. Shame.

Richard Duffy is a supposed to be an engineer but mostly he had been a high-flying adventurer over the years, doing a bit of this and that. Basically whatever needed to make a good plot. Like in "Duel for the Samurai Sword" where he had spent some time learning Kendo from Master Ohara in Japan and eventually becoming the Master's prized pupil. But there's always an evil guy in the dojo, Sakuma who's so bad he turned into a Yakuza boss. Well, the Master is dying and he wants to give the sword to Uncle Duffy, but Sakuma wants it and is willing to kill for it. So, yeah what we have here is a full-tilt chase, Stephen and his Uncle just trying to stay out of Sakuma's grasp until their plane leaves. Along the way the Master's daughter is kidnapped, we learn a little about Japanese culture, have car chases and tons of fighting. One of the more entertaining aspects of this series is that Stephen is a movie buff and often compares things to movies. Really, I mean this is a young adult book that name drops 1978's "The Yakuza" starring Robert Mitchum. Probably the only one too. Shame.

Obviously this ain't a deep book, but it's pleasant, quick and breezy. A nice palate cleanser between bloodier books. That being said it's very much a Men's Adventure series albeit for a younger crowd. The series last 10 books which is fairly commendable for books with no I.P. like The Hardy Boys, but the print runs must have been short cause they ain't the easiest to track down, they are a lot of fun if you do though.

Posted by bloodyspicybooks at 12:31 PM